UEX Corporation (UEX:TSX) (“UEX” or the “Company”) is pleased to announce the third tranche of assay results have been received for twenty additional holes from the winter drilling program to expand the West Bear Cobalt-Nickel Deposit (the “Deposit”) on the 100% owned West Bear Property, located in the eastern Athabasca Basin of northern Saskatchewan.

The drilling program commenced in early January and field activities have now concluded for the spring thaw.  This winter, the Company completed 126 holes totaling 11,412.5 metres.  To date, assay results have been received for fifty-six drill holes.  UEX announced assay results from the first thirty-six holes in the Company’s news releases dated February 7, 2019 and March 18, 2019, available at www.sedar.com or UEX’s website at www.uex-corporation.com.

The drill results from this tranche of assays have expanded the strike length of the West Bear Cobalt-Nickel Deposit to 600 m and defined the western end of the Deposit.

The Company has also collected and submitted to the laboratory an additional 430 samples from 60 of the 2005 and 2007 sonic drill holes identified as containing previously unsampled intervals considered favorable for hosting cobalt-nickel mineralization below the West Bear Uranium Deposit.

I am pleased with the excellent work of our technical team this winter squeezing out the maximum amount of drill holes at West Bear before the spring thaw.  We successfully met our goal of expanding the Deposit along strike to the west.  With assay results from seventy new holes still outstanding, many of which are focussed in the eastern area of the Deposit, and assays pending from the historic sonic holes, I look forward to seeing what the  results of the next batches of assays does to shape our ever evolving understanding the West Bear Cobalt-Nickel Deposit and how our knowledge can be applied to other targets across the Athabasca Basin. 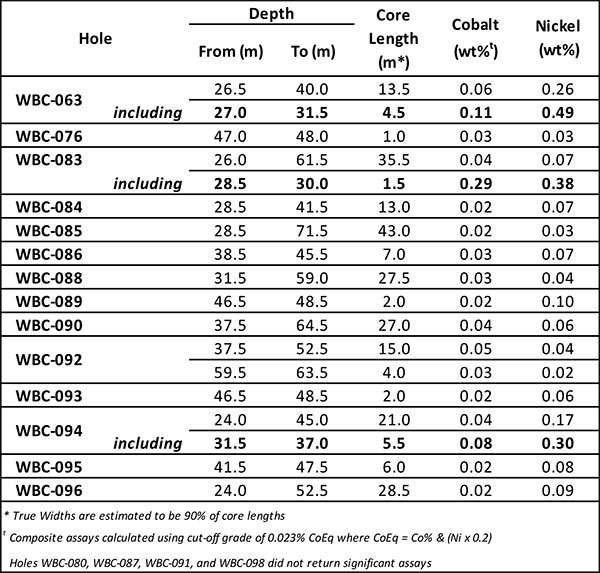 The West Bear Property is an advanced exploration project located in the eastern Athabasca Basin of northern Saskatchewan, Canada that contains both the West Bear Cobalt-Nickel Deposit and the West Bear Uranium Deposit. The Property is approximately 740 kilometres north of Saskatoon, west of Wollaston Lake and measures approximately 7,983 hectares comprising of 24 contiguous areas to which UEX has 100% ownership, with the exception of Mineral Lease 5424 in which UEX owns a 77.575% interest.  The Deposit is located within an area of the Athabasca Basin that has excellent infrastructure and is situated within 10 km of an existing all-weather road and power lines that service Cameco Corporation’s nearby Cigar Lake Mine and Rabbit Lake Operation, as well as Orano’s McClean Lake Operation.

The West Bear Cobalt-Nickel Deposit currently has a strike length of over 550 m and a dip length of over 100 m. On July 10, 2018, the Company announced a maiden inferred resource estimate for the Deposit of 390,000 tonnes grading 0.37% cobalt and 0.22% nickel, which equates to 3,172,000 pounds of cobalt and 1,928,000 pounds of nickel. The West Bear Cobalt-Nickel Deposit mineral resources were determined using a cut-off grade of 0.023 percent cobalt equivalent (“CoEq”), using the equation CoEq = Co + (Ni x 0.2).  Only mineralization located within a conceptual open pit was included in the final resource estimate.

The technical information in this news release has been reviewed and approved by Roger Lemaitre, P.Eng., P.Geo., UEX’s President and CEO and Trevor Perkins, P.Geo., UEX’s Exploration Manager, who are each considered to be a Qualified Person as defined by National Instrument 43-101.

The nineteen projects are located in the eastern, western and northern perimeters of the Athabasca Basin, the world's richest uranium belt, which in 2017 accounted for approximately 22% of the global primary uranium production.  UEX is currently advancing several uranium deposits in the Athabasca Basin which include the Christie Lake deposits, the Kianna, Anne, Colette and 58B deposits at its currently 49.1%-owned Shea Creek Project (located 50 km north of Fission’s Triple R Deposit and Patterson Lake South Project, and NexGen’s Arrow Deposit) the Horseshoe and Raven deposits located on its 100%-owned Horseshoe-Raven Development Project and the West Bear Uranium Deposit located at its 100%-owned West Bear Project. 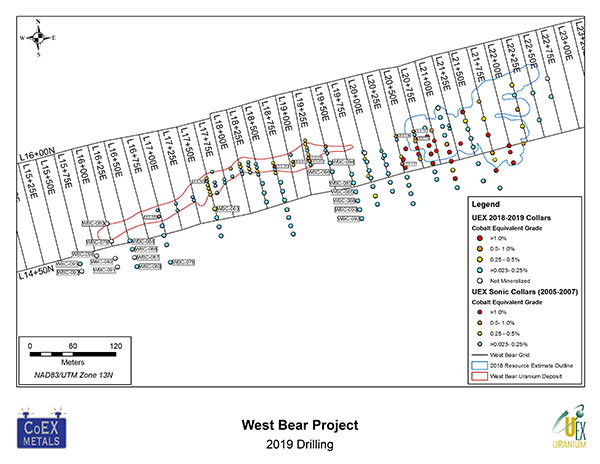