UEX Corporation (UEX:TSX) (“UEX” or the “Company”) is pleased to announce the 2018 drilling program on the Christie Lake Project (the “Project”) is set to commence.

The winter 2018 exploration program is underway, with the goal of expanding the uranium resources on the Yalowega Uranium Trend (the “Trend”). The $1.5 million program consists of approximately 4,500 m of drilling in 9 holes. The program will focus on testing targets located along strike and northeast of the Ōrora Deposit (see Figure 1).

The winter program will test unconformity targets located northwest and up-dip of modest basement-hosted uranium mineralization drilled by the previous operator in the 1990s (Figure 1). Testing up-dip of similarly mineralized holes by UEX in 2017 led to the discovery of the Ōrora Zone.

I continue to be very optimistic about the opportunity to make additional discoveries along the Trend. The 2017 exploration program at the Christie Lake Project brought great success with the Ōrora Zone discovery. I am excited about the targets we will be testing this winter and eagerly look forward to seeing what the exploration team will achieve in the coming months.

UEX has mobilized a crew to re-open the camp, confirm the thickness of lake ice in the planned drilling areas, and if required take steps to thicken the ice. Drilling operations are expected to commence by the end of the week.

UEX currently holds a 45% interest in the Christie Lake Project and is working under an option agreement to earn up to a 70% interest. The Project is located approximately 9 km northeast and along strike of Cameco’s McArthur River Mine, the world’s largest uranium producer. The P2 Fault, the controlling structure for all of the McArthur River deposits, continues to the northeast beyond the mine. UEX believes that through a series of en-echelon steps the northeast strike extension of the P2 Fault not only crosses the Project but also controls the three known uranium deposits on Christie Lake, the Ōrora, Paul Bay and Ken Pen Deposits.

The Paul Bay and Ken Pen Deposits are estimated to host a combined 20.87 million pounds of U3O8 at an average grade of 3.22% U3O8 and were discovered in 1989 and 1993 respectively. This is a historic resource estimation which does not use resource classifications consistent with NI 43-101. The historical resource estimate was presented in an internal report titled Christie Lake Project, Geological Resource Estimate completed by PNC Tono Geoscience Center, Resource Analysis Group, dated September 12, 1997. The historical resource was calculated using a 3 D block model using block sizes of 2 m by 2 m by 2 m, and block grades interpolated using the inverse distance squared method over a circular search radius of 25 m and 1 m height. Specific gravities for each deposit were averaged from specific gravity measures of individual samples collected for assay. UEX plans to complete additional infill drilling on the deposits during the option earn-in period to upgrade these historic resources to indicated and inferred. A qualified person has not done sufficient work to classify the historic estimate as current mineral resources or mineral reserves. UEX is not treating the historic estimate as current mineral reserves or mineral resources and the reader is advised not to rely upon this historical estimate as a resource estimate.

Through its 100% owned subsidiary CoEX Metals Corporation, the Company is also conducting cobalt exploration and development activities at the West Bear Property, which hosts both the West Bear Cobalt-Nickel Prospect and the West Bear Uranium Deposit.

The fifteen projects are located in the eastern, western and northern perimeters of the Athabasca Basin, the world’s richest uranium belt, which in 2015 accounted for approximately 22% of the global primary uranium production. UEX is currently advancing several uranium deposits in the Athabasca Basin which include the Christie Lake deposits, the Kianna, Anne, Colette and 58B deposits at its currently 49.1%-owned Shea Creek Project (located 50 km north of Fission’s Triple R Deposit and Patterson Lake South Project, and NexGen’s Arrow Deposit) the Horseshoe and Raven deposits located on its 100%-owned Horseshoe-Raven Development Project and the West Bear Uranium Deposit located at its 100%-West Bear Property.

JCU is a private company that is actively engaged in the exploration and development in Canada. JCU is owned by three Japanese companies. Amongst these, Overseas Uranium Resources Development Co., Ltd. (“OURD”) acts as the manager of JCU. JCU has partnerships with UEX, AREVA, Cameco, Denison and others on uranium exploration and development projects in the Athabasca Basin of Northern Saskatchewan including Millennium and Wheeler River and the Kiggavik project in the Thelon Basin in Nunavut.

This news release contains statements that constitute “forward-looking information” for the purposes of Canadian securities laws. Such statements are based on UEX’s current expectations, estimates, forecasts and projections. Such forward-looking information includes statements regarding the proposed spin‑out of CoEX shares, UEX’s drill hole results, the likelihood of REG and scintillometer results being confirmed by assays, mineral resource and mineral reserve estimates, uranium, cobalt and nickel prices, outlook for our future operations, plans and timing for exploration activities, and other expectations, intentions and plans that are not historical fact. Such forward-looking information is based on certain factors and assumptions and is subject to risks, uncertainties and other factors that could cause actual results to differ materially from future results expressed or implied by such forward-looking information. Important factors that could cause actual results to differ materially from UEX’s expectations include uncertainties relating to the possible spin-out of CoEX, interpretation of drill results and geology, reliability of REG results produced by the Company’s down-hole probing system, scintillometer results, assay confirmation, additional drilling results, continuity and grade of deposits, participation in joint ventures, reliance on other companies as operators, public acceptance of uranium as an energy source, fluctuations in uranium, cobalt and nickel prices and currency exchange rates, changes in environmental and other laws affecting uranium, cobalt and nickel exploration and mining, and other risks and uncertainties disclosed in UEX’s Annual Information Form and other filings with the applicable Canadian securities commissions on SEDAR. Many of these factors are beyond the control of UEX. Consequently, all forward-looking information contained in this news release is qualified by this cautionary statement and there can be no assurance that the CoEX spin-out will occur as proposed or at all, or that actual results or developments anticipated by UEX will be realized. For the reasons set forth above, investors should not place undue reliance on such forward-looking information. Except as required by applicable law, UEX disclaims any intention or obligation to update or revise forward-looking information, whether as a result of new information, future events or otherwise. 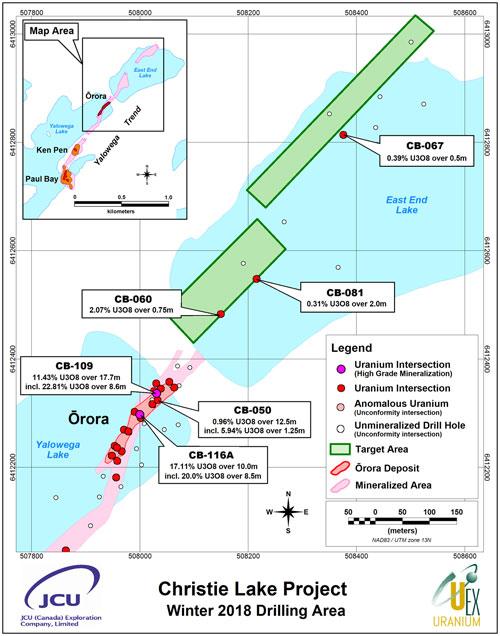