UEX Corporation (UEX:TSX) (“UEX” or the “Company”) is pleased to announce that the first drill hole of the 2017 exploration program at the  Christie Lake Project (the “Project”) has encountered a new high-grade zone of unconformity-style uranium mineralization along the Yalowega Mineralized Trend, 500 m northeast and along strike of the known deposits (see Figure 1).

A table showing the distribution of scintillometer readings from this mineralized interval is outlined below. 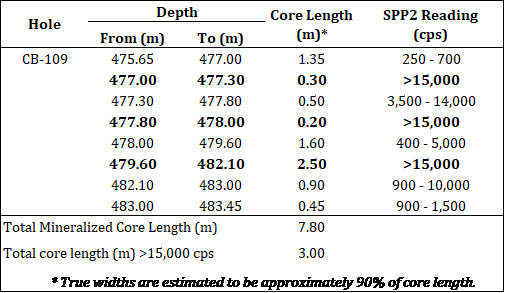 I congratulate our team on their new discovery and look forward to watching them expand this zone into another deposit.

Radiation reported in this news release was measured in counts per second (cps) using a SPP2-NF Series 20 gamma scintillometer, which can read up to 15,000 cps. The reader is cautioned that total count gamma readings may not be directly or uniformly related to uranium grades of the rock sample measured and should only be used as a preliminary indication of the presence of radioactive materials.

Samples have been collected for assay analysis to confirm these scintillometer results.  The samples will be analyzed at the Geoanalytical Laboratory at the Saskatchewan Research Council in Saskatoon, Saskatchewan.

UEX currently holds a 30% interest in the Christie Lake Project and is working under an option agreement to earn up to a 70% interest.  The Project is located approximately 9 km northeast and along strike of Cameco’s McArthur River Mine, the world’s largest uranium producer.  The P2 Fault, the controlling structure for all of the McArthur River deposits, continues to the northeast beyond the mine.  UEX believes that through a series of en-echelon steps the northeast strike extension of the P2 Fault not only crosses the Project but also controls the two known uranium deposits on Christie Lake, the Paul Bay and Ken Pen Deposits.

The Paul Bay and Ken Pen Deposits are estimated to host a combined 20.87 million pounds of U3O8 at an average grade of 3.22% U3O8 and were discovered in 1989 and 1993 respectively.  This is a historic resource estimation which does not use resource classifications consistent with NI 43-101.  The historical resource estimate was presented in an internal report titled Christie Lake Project, Geological Resource Estimate completed by PNC Tono Geoscience Center, Resource Analysis Group, dated September 12, 1997.  The historical resource was calculated using a 3 D block model using block sizes of 2 m by 2 m by 2 m, and block grades interpolated using the inverse distance squared method over a circular search radius of 25 m and 1 m height.  Specific gravities for each deposit were averaged from specific gravity measures of individual samples collected for assay.  UEX plans to complete additional infill drilling on the deposits during the option earn-in period to upgrade these historic resources to indicated and inferred.  A qualified person has not done sufficient work to classify the historic estimate as current mineral resources or mineral reserves.  UEX is not treating the historic estimate as current mineral reserves or mineral resources.

UEX (TSX:UEX, OTC:UEXCF.PK, UXO.F) is a Canadian uranium exploration and development company involved in fourteen uranium projects, including three that are 100% owned and operated by UEX, one joint venture with AREVA Resources Canada Inc. (“AREVA”) that is operated by UEX, as well as eight joint ventures with AREVA, one joint venture with AREVA and JCU (Canada) Exploration Company Limited, which are operated by AREVA, and one project (Christie Lake) under option from JCU (Canada) Exploration Company Limited and operated by UEX.  The fourteen projects are located in the eastern, western and northern perimeters of the Athabasca Basin, the world's richest uranium belt, which in 2015 accounted for approximately 22% of the global primary uranium production.  UEX is currently advancing several uranium deposits in the Athabasca Basin which include the Christie Lake deposits, the Kianna, Anne, Colette and 58B deposits at its currently 49.1%-owned Shea Creek Project (located 50 km north of Fission’s Triple R Deposit and Patterson Lake South Project, and NexGen’s Arrow Deposit) and the Horseshoe, Raven and West Bear deposits located at its 100%-owned Hidden Bay Project. 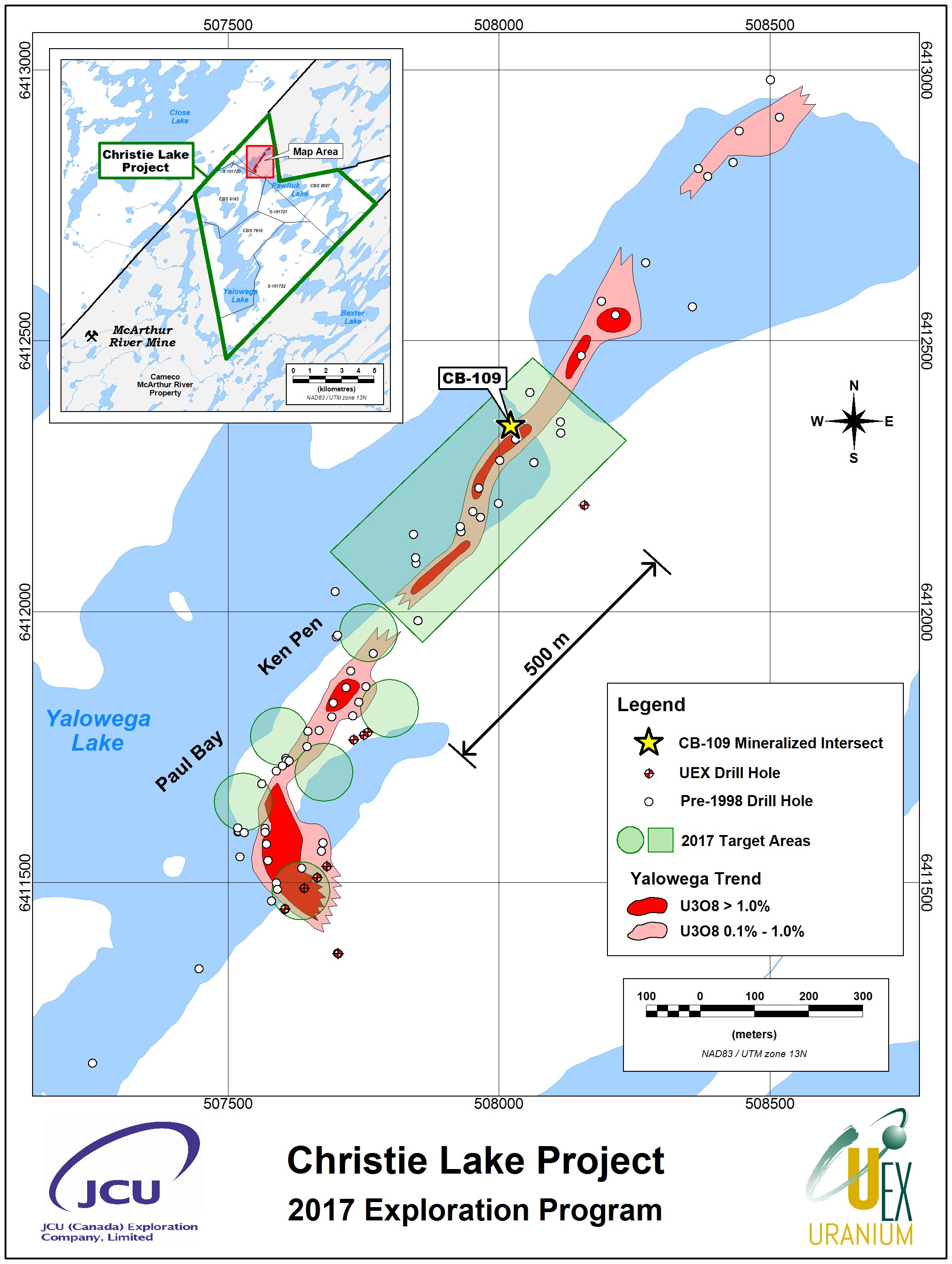