UEX Corporation (UEX:TSX) (“UEX” or the “Company”) is pleased to announce the results of the 2019 Phase II exploration program at the Christie Lake Project.  The summer drilling program was 8,122 m diamond drilling in 14 holes.

The highlight of the program was the intersection of new uranium mineralization in hole CB-141.  This hole encountered perched uranium mineralization located approximately 8 m above the unconformity that returned a Radiometric Equivalent Grade (“REG”) of 1.17% eU3O8 over 1.9 m from 498.1 m to 499.6 m (true width is anticipated to be 85-90% of the core length).   CB-141 was drilled to test the B Trend approximately 600 m along strike to the northeast of historical mineralized drill hole CB-048, which averaged 0.25% U3O8, 2.05% Co and 2.32% Ni over 1.5 m within a fault structure located approximately 50 m below the unconformity.  Strong hydrothermal alteration was observed in drill holes collared northeast of CB-141 and in a separate location 1.5 km southwest in hole CB-147 drilled at the southernmost end of the B Trend coincident with another low resistivity anomaly. Due to poor core recovery within the mineralized interval in CB-141, REG’s are considered to be a more accurate representation of uranium concentration than assay grades for this hole.  For more information regarding the determination of REG’s please refer to the section below About Radiometric Equivalent Grades.

In the Ōrora North area, three holes were drilled to test the southwest margin of the large and strong resistivity anomaly identified at the unconformity north of the Ōrora Deposit and parallel to the Yalowega Trend (see Figures 1 and 2).  Strong hydrothermal alteration, including thick dravite clay-filled veins, was encountered in holes CB-142, CB-143 and CB-145 along a previously unknown northwest-oriented fault structure, verifying the Company’s interpretation that there may be a fault-offset of the Ōrora mineralization and alteration system.  These holes only tested the extreme southwest end of the prospective Ōrora North resistivity anomaly.  The Ōrora North area remains a very high priority drill target area and UEX will be proposing additional drilling and geophysical surveying of this target for consideration by its joint venture partner in 2020.

Holes CB-136 and CB-138, targeting the Southwest C Extension (see Figure 1) that covers the area 100 m to 600 m southwest along strike of the Paul Bay Deposit on the C Conductor Trend did not extend the narrow zones of mineralization in hole CB96-083.  However, the drilling did determine that there are two parallel and undertested fault structures associated with the Yalowega Trend that extend southwest of the Paul Bay Deposit.

UEX has commenced a 7-hole – 2,000 m brownfields exploration drill program at the McClean South Area of the Hidden Bay Project.  The McClean South area is located immediately adjacent to and south of Orano’s McClean Lake Operation, immediately on-strike of the mined-out Sue Uranium Deposits.  The Sue Deposits are a cluster of five uranium deposits that occur over a north-south strike length of 1.7 km hosted within the Sue Fault structure.  The southernmost Sue Deposit, Sue E, was mined by open pit.  The pit’s margins are located within 50 m from our property boundary.

The McClean South drill program is one of the few brownfields-type exploration programs in the Athabasca Basin controlled by a junior explorer and developer.  The drill program is anticipated to be completed by the end of November.

Exploration drilling by UEX along strike of the Sue Deposits focused on drill-testing the extension of the Sue Fault onto the Hidden Bay Property.  UEX has also drill tested the Telephone Fault, located parallel to and 500-600 m west of the Sue Fault.  Drilling on the Telephone Fault has encountered scattered uranium mineralization and hydrothermal alteration over a 4 km strike length immediately south of the property boundary.   Uranium mineralization along the Telephone Fault occurs in several widely-spaced small narrow pods which can sometimes be very high grade, such as hole SP-156, which encountered 4.53% U3O8 over 0.5 metres.

This summer, UEX completed a RadonExTM radon survey covering the northern part of the Telephone and Sue Faults.  Several radon anomalies were detected between the two fault structures.  Coupled with historic geophysical and geochemical data, UEX believes there may be faults oriented in an east-north-east direction between and linking the Telephone and Sue Faults.  Such linking faults are a key host environment of several of the economically exploited uranium deposits at Cameco’s Eagle Point Mine.

In addition to the radon, geochemical and geophysical information, UEX’s analysis of the relative movements along both the Sue and Telephone faults suggests that the presence of such prospective linking faults is likely.

To access the webinar, participants will need to register in advance through the following link:

After registering, participants will receive a confirmation email containing information about joining the webinar.  Please be advised that the total number of registrants is limited.  For those interested but unable to attend, a video of the webinar will be posted on the UEX website (www.uexcorp.com) shortly after the event has concluded.

Using down-hole probes to calculate radiometric equivalent grades is a common practice by uranium mining companies in the Athabasca Basin.  Down-hole probes are often able to accurately measure uranium concentration in-situ within the drill hole.  Grades can be determined when a gamma ray particle emitted from uranium mineralization in the hole enters the probe and strikes the probe’s photomultipler tube, causing a light flash to occur.  The number of individual light flashes can be counted every second (counts per second or cps) and a uranium grade determined using standard equations and individual probe characteristics determined when the probe is calibrated.

UEX currently holds a 60% interest in the Christie Lake Project and has entered into a joint venture with JCU.  The Project is located approximately 9 km northeast and along strike of Cameco’s McArthur River Mine, the world’s largest uranium producer.  The P2 Fault, the controlling structure for all of the McArthur River deposits, continues to the northeast beyond the mine.  UEX believes that through a series of en-echelon steps the northeast strike extension of the P2 Fault not only crosses the Project but also controls the three known uranium deposits on Christie Lake, the Ōrora, Paul Bay and Ken Pen Deposits.

The Christie Lake Project is currently estimated to contain 588,000 tonnes grading 1.57% U3O8, which equates to 20.35 million pounds of U3O8 using a cut-off grade of 0.2% U3O8 and are documented in the “Technical Report for the Christie Lake Uranium Project, Saskatchewan, Canada” which was filed on February 1, 2019 and has an effective date of December 13, 2018.  The Technical Report is available on the Company’s website at www.uexcorp.com and on SEDAR at www.sedar.com.

The twenty-one projects are located in the eastern, western and northern perimeters of the Athabasca Basin, the world's richest uranium belt, which in 2017 accounted for approximately 22% of the global primary uranium production.  UEX is currently advancing several uranium deposits in the Athabasca Basin which include the Christie Lake deposits, the Kianna, Anne, Colette and 58B deposits at its currently 49.1%-owned Shea Creek Project (located 50 km north of Fission’s Triple R Deposit and Patterson Lake South Project, and NexGen’s Arrow Deposit) the Horseshoe and Raven deposits located on its 100%-owned Horseshoe-Raven Development Project and the West Bear Uranium Deposit located at its 100%-owned West Bear Project.

JCU is a private company that is actively engaged in the exploration and development in Canada.  JCU is owned by three Japanese companies.  Amongst these, Overseas Uranium Resources Development Co., Ltd. (“OURD”) acts as the manager of JCU.  JCU has partnerships with UEX, Orano, Cameco, Denison and others on uranium exploration and development projects in the Athabasca Basin of Northern Saskatchewan including Millennium and Wheeler River and the Kiggavik project in the Thelon Basin in Nunavut. 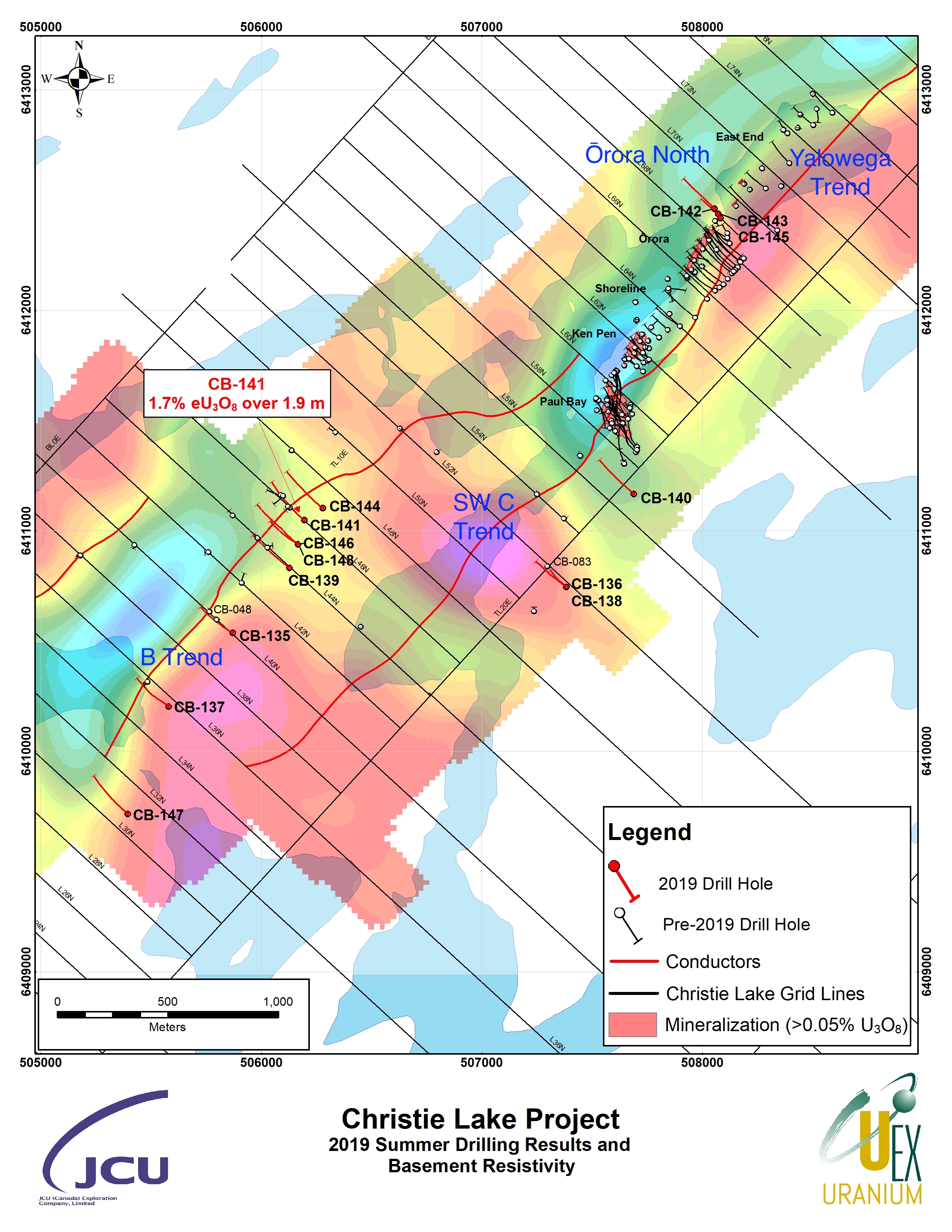 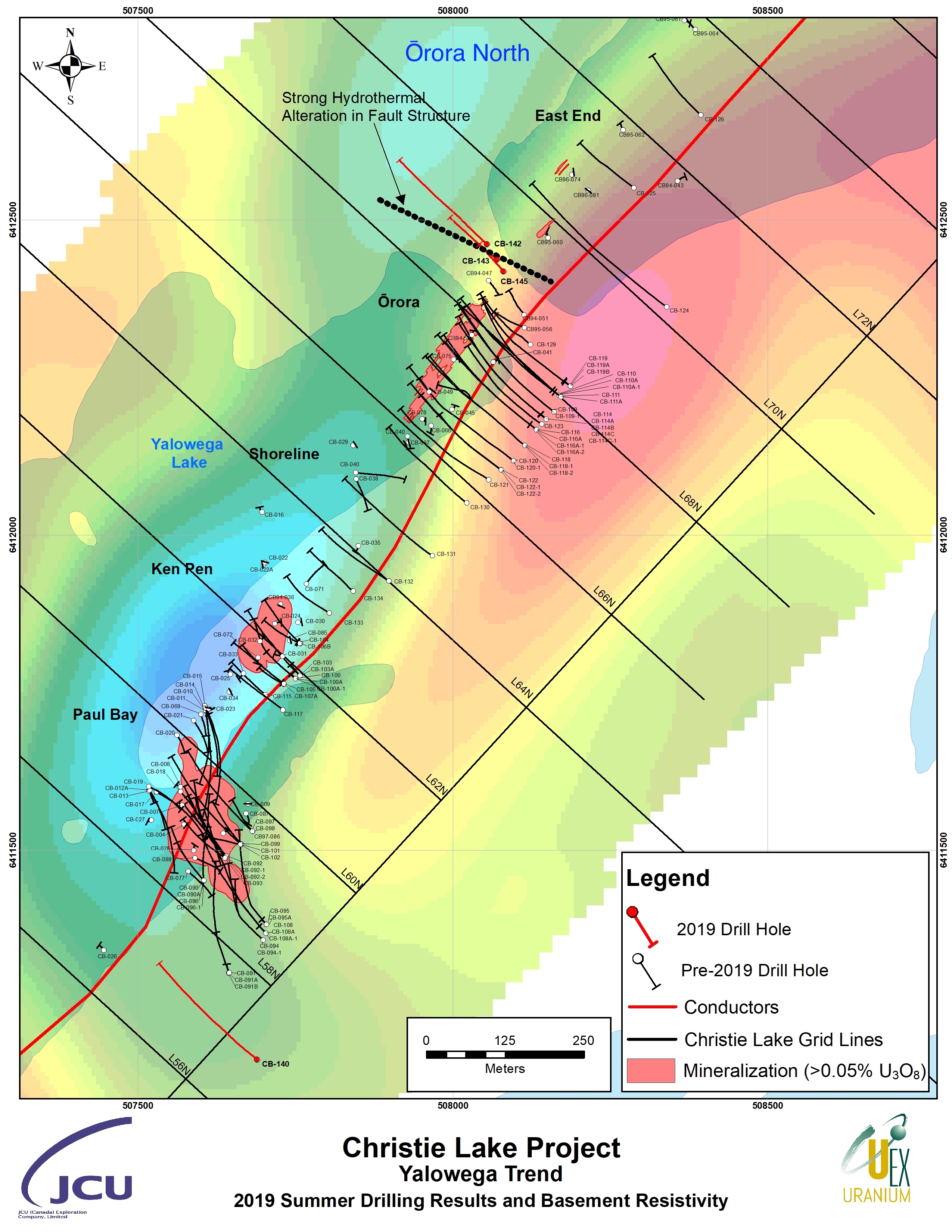